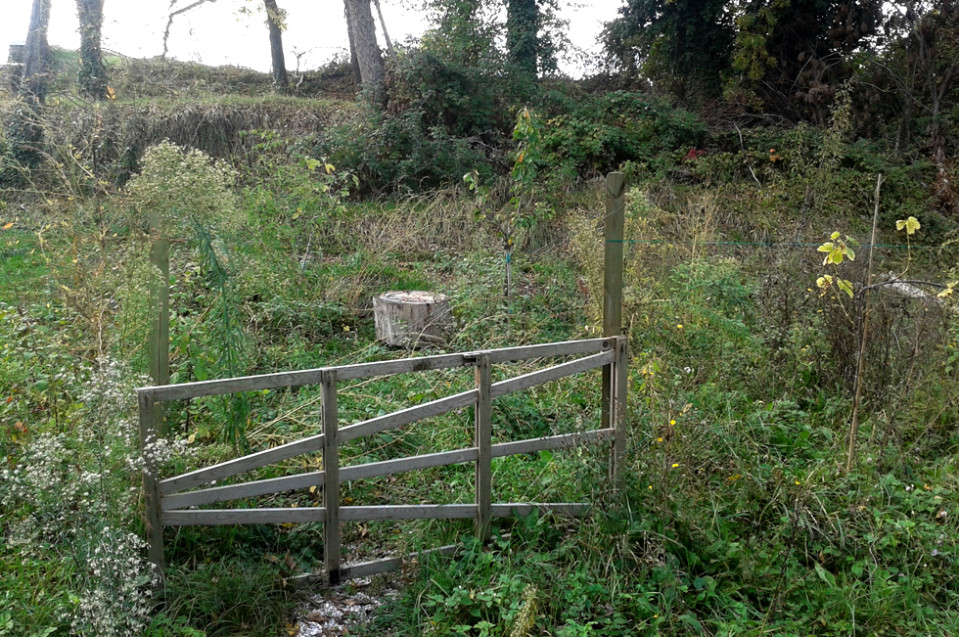 The Promised Garden – Notes on Manzoni’s Botanics is a botanic installation inspired by a study and interpretation of the 33rd chapter of the novel I promessi sposi (The Betrothed), where the author describes an abandoned garden in great detail, listing every single plant in it. The fascination with the abandoned that emanates from Manzoni’s pages anticipates the idea of a “garden without a gardener”, a central point of the “Third Landscape” concept developed by Gilles Clement in the second half of the 20th century.
This suggestion has inspired the artist Claudio Rocchetti whose research focuses on the relationship between memory and abandonment. After a visit to Forte Marghera the artist had found a specific area in which to realise his idea: the Promised Garden is a botanic installation featuring all twenty plants quoted in Manzoni’s description of the garden, an environmental sculpture which changes constantly, located in a field in Forte Marghera’s park, between a fallen tree and a defensive barrier. In the Promised Garden several fruit, vegetable, and herbal plants are left to grow and develop freely: A garden left to itself, left to the spontaneous vitality of vegetal life, a place where species, which are usually eliminated, can prosper and multiply this variety and diversity, also through seeds brought by birds and the wind which produce incredible plants by surprise. The botanic installation is introduced and accompanied by a series of educational materials, which have been developed specifically. With these, the public will be able not only to read the text of the novel, but also to recognise the arboreal species which were used and understand their symbolism in relation to the original text.
Sound Performance Cycle The Promised Garden hosts a series of sound performances by Italian and European musicians throughout the month of May 2013. These dates dedicated to sound aim at placing contemporary musical research in a specific place, and in the context of two issues: abandonment and memory. Claudio Rocchetti describes music as a “system of goodbyes” in which every note that dies is followed immediately by another which keeps its memory alive. Within these physics of sound the relationship with vegetal life emerges because, as the seeds disappear with the plant growing, so the fruit succeeds the flower, keeping its memory as well as the possibility of reproduction alive.
(Yuri Elena, Nero Magazine)